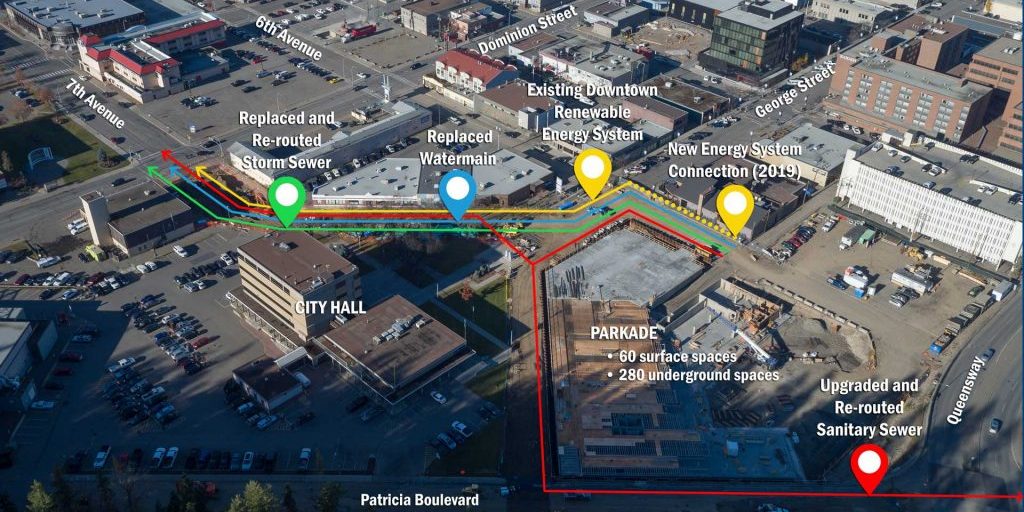 The construction of the new parkade and condominium project next to City Hall is presenting the City of Prince George with a perfect opportunity to upgrade critical nearby infrastructure that is at capacity, in poor condition, or at high risk of failure.

Working with local contractors, the City has replaced and rerouted the storm water piping system, and upgraded and rerouted the sanitary sewer. In fact, a new sewer line is being installed across Queensway and along Lower Patricia to provide the additional capacity that is crucial for further growth downtown.

The excavation along Seventh Avenue has provided the opportunity to replace an old watermain in front of City Hall. Made of cast iron pipe and about 60 years old, this watermain had been rated by the City as “very high risk” for failure.

Construction has involved weaving new infrastructure through existing pipes, the Downtown Renewable Energy System, and services from other utilities such as TELUS, Fortis, and BC Hydro. In all cases, services had to be maintained while work was underway. Crews also removed decommissioned infrastructure that still remained underground, including the remnants of an old wooden pipe used to distribute water many years ago.

The intersections at Sixth and George and at Seventh and Dominion will reopen in about a month. Next year, an extension of the district energy system will be added to the new parkade.

Yesterday, the city released a video that illustrates many of the aspects of the operations downtown. The city also maintains a web page at www.princegeorge.ca/downtown with information about the progress downtown. The page includes information on road closures and a link to downtown parking information.